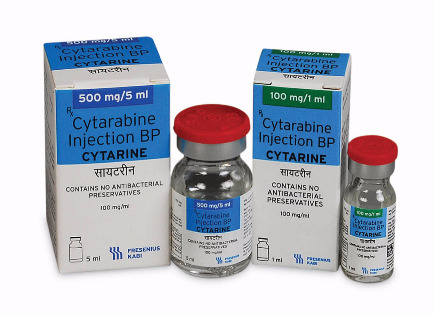 Cytarabine is cytotoxic to a wide variety of proliferating mammalian cells in culture. It exhibits cell phase specificity, primarily killing cells undergoing DNA synthesis (S-phase) and under certain conditions blocking the progression of cells from the G1 phase to the S-phase. Although the mechanism of action is not completely understood, it appears that cytarabine acts through the inhibition of DNA polymerase. A limited, but significant, incorporation of cytarabine into both DNA and RNA has also been reported. Extensive chromosomal damage, including chromotoid breaks, have been produced by cytarabine and malignant transformation of rodent cells in culture has been reported. Deoxycytidine prevents or delays (but does not reverse) the cytotoxic activity.

In the induction therapy of acute non-lymphocytic leukemia, the usual cytarabine dose in combination with other anticancer drugs is 100 mg/m2/day by continuous IV infusion (Days 1 to 7) or 100 mg/m2 IV every 12 hours (Days 1 to 7).